Rendez-vous on the paradise island south of Brazil!

Ask for a quote

Ilha Grande is the top destination for ecotourism in the Rio de Janeiro region. Located about 15kms off the Costa Verde, it is easily reached from the town of Angra dos Reis. The trip is made on board sailboats that provide daily shuttles between the island and the mainland in 1 hour (or half an hour by speedboat). Easily accessible, it represents a choice destination for travellers who have already planned a trip to Rio de Janeiro, but wish to extend it with a nature stop in the region.

The island has a small population of only 3,000 inhabitants, most of them living in small communities,  the main one being Vila do Abraão. The island is 193 km² of rugged terrain covered with virtually untouched rainforest. Perfect for visitors to explore once they have landed on its beaches with crystal clear waters. Ilha Grande is a real Treasure Island paradise, straight out of Stevenson’s novel. It is a particularly attractive destination that lends itself as well to a romantic getaway as to a family holiday. It will satisfy lovers of history and culture thanks to a rich history with ruins scattered across the island. Ilha Grande has many beaches, small coves and other creeks around its perimeter which are more or less deserted depending on how far you decide to venture. You have to buy a shuttle boat ticket that leaves from Vila do Abraão to reach some of them. The many beaches on Ilha Grande offer both calm and transparent waters ideal for snorkelling and diving and on others there are perfect waves for surfing.

The island’s other main attraction lies in the large number of marked and maintained hiking trails along the coast and also inland. These are useful to reach the different points of the island and also allow you to climb to the island’s peaks such as the Pico do Papagaio (parrot peak) which is the most famous, at about 959m altitude. From up here you have an impressive view of the island and the continent in the distance. It’s a perfect place to see the amazing landscape and vegetation crisscrossing the island from coast to coast.

The hamlet of Vila do Abraão stretches along the coast with two paths that go up perpendicular to the beach. It consists mainly of pousadas, but there are also some restaurants and beach rental companies to hire beach equipment and bicycles to ride around the island.

A stay on Ilha Grande is a time to relax and immerse yourself in a natural and preserved environment. It’s an ideal place to reflect and really feel far from modern civilisation in a place that seems lost in time.

What sets this wonderful destination apart from others in the region, is that this island paradise has only been open to visitors for the last 20 years!

A trip to Ilha Grande is a chance to see a wild jungle enclave that has experienced minimal human impact.

Ilha Grande is an ecotourism destination, respecting the Mata Atlantica rainforest which is now almost completely decimated on the rest of Brazilian coast. The island has little infrastructure and personal cars are prohibited. You will find very few roads, but 150kms of hiking trails linking villages and preserved coastal hamlets that are sometimes accessible by bike.

Explore the National Park and look for birds or monkeys, without being bothered by modern civilization. It’s ideal for a relaxing break during your trip to Brazil.

You will come across many waterfalls and lagoons during your walks in the forest on marked and well maintained trails that are accessible by all. The beaches are often deserted, and are considered to be among the most beautiful in the world, such as Lopes Mendes beach. With 3kms of white sand, emerald green vegetation and a turquoise blue ocean, it is a paradise for surfers throughout the year.

Swimming and snorkelling are best on the more sheltered beaches of the inner coast such as Lagoa Azul or Lagoa Verde reachable by boat, or the bay of Saco do Céu. For surfing, it’s best to go to the beaches facing the sea. There is something for everyone on Ilha Grande, from the most adventurous travellers to contemplative singles, couples or families!

Explore an island with an incredible history

Ilha Grande, called “Ipaum Guacu” by the Tamoios indians, is the largest ocean island of Brazil, off the Costa Verde, in the Rio de Janeiro state.

29kms long and 12kms wide, it is surrounded by several smaller islands including Ilha dos Macacos, Ilha do Meio and Ilha Pau-a-pino that were often used by seafarers such as Jorge Grego. These pirates were in search of ships full of treasures going to Rio or coming from Paraty in the mid 18th century.

Ilha Grande is large enough to control its own water and food resources and is geographically isolated. It has therefore harboured all sorts of people in the past : lepers, indigenous, slaves, and also criminals who were imprisoned in the Dois Rios prison, built at the end of the 19th century.

It was only in 1994 that the prison was closed and the island could pursue tourism. Its ecosystem has hardly been disturbed by urbanization or intensive agriculture and therefore has an incredible richness and is particularly well preserved. It’s an exceptional situation that naturally led the authorities to promote ecotourism, to help protect this unique natural heritage.

The true luxury of Ilha Grande is its peace and quiet so close to a megalopolis.

Ilha Grande offers you a little corner of paradise, a garden of Eden where no one has the desire to leave.

So, if you’re looking for a hustle-free vacation and somewhere to rejuvenate, reconnect and admire the wonders of nature that surround you, Ilha Grande will meet all your expectations.

The transfers between Rio de Janeiro and the Costa Verde port mentioned in the program are a private service with a Portuguese speaking driver.
The transfers by boat from the Costa Verde dos Reis and Vila do Abraão mentioned in the program are aboard regular boat services and so are not private.
Meals are not included except the buffet breakfasts at the pousada where you stay.

Depending on your itinerary for your trip to Brazil, a driver and vehicle will pick you up at one of the airports or hotels in Rio de Janeiro.

For the first leg of your transfer to Ilha Grande you will take the road towards the city of Angra dos Reis. After about 2hrs30, you will arrive at the port of Angra. From here, you will take one of the boats making the 1hr30 regular trip to the village of Abraão on the island.

Here, a member of the pousada staff will welcome you and help take you and your luggage to the pousada.

After your check-in, you can rest or go for a wander around the village and discover this little haven of peace.

Night at the pousada. 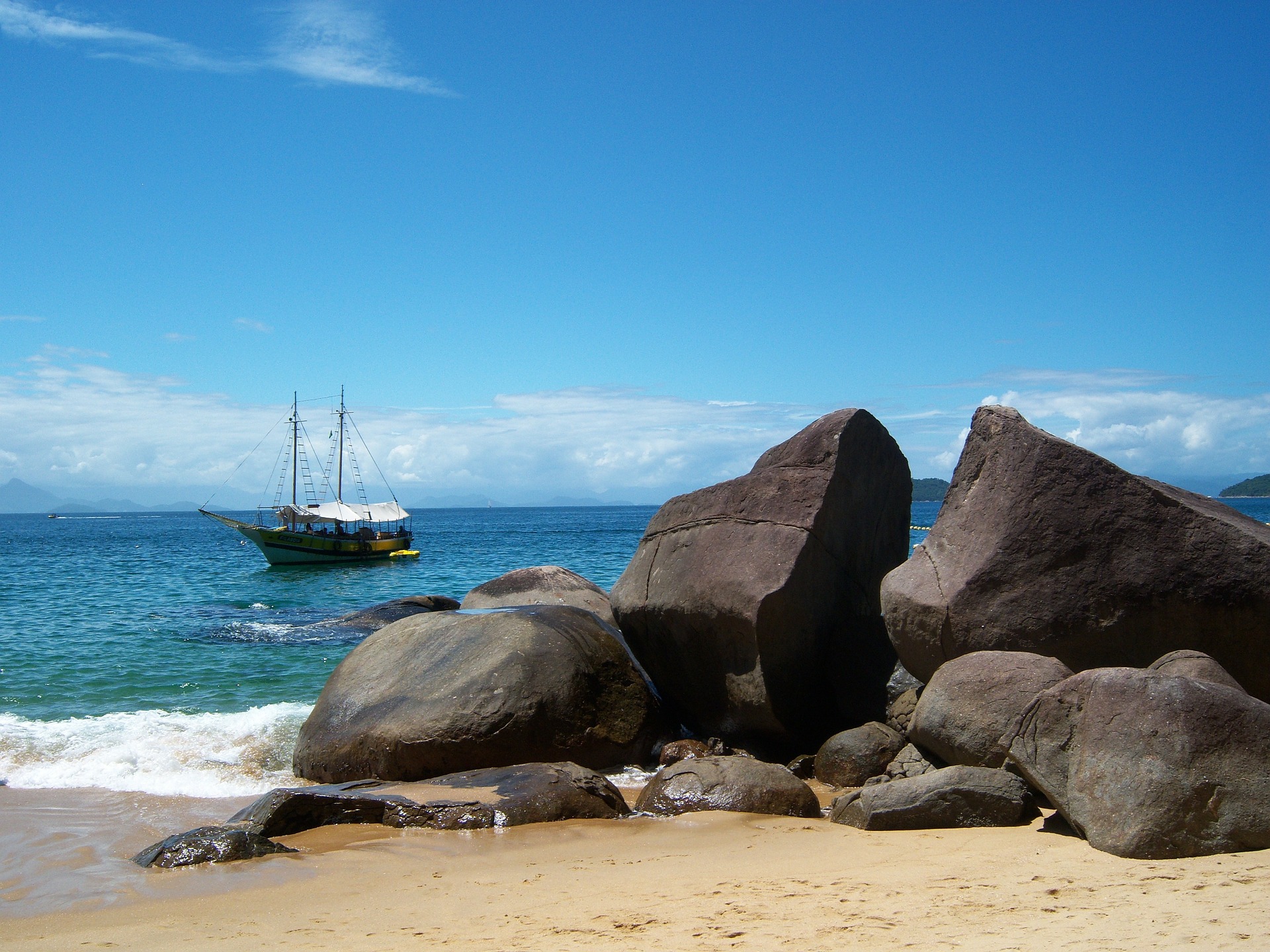 After breakfast at the pousada restaurant, the beaches and relaxation await you. You can also rent bicycles in the village to get around quicker or go for a walk in the surroundings.

We suggest you go to one of the beaches that has made the reputation of this island, such as Praia Lopes Mendes, one of the most beautiful in Brazil with its 3kms of white sand and ideal waves for surfing. At 6kms from the village, you can reach it by taking the T10 hiking path, or take a boat from the Vila and sail to Praia do Pouso, then walk about twenty minutes (1km) to the beach.

You can also reach other beaches by boat or hiking trail or choose to visit the various ruins on the island.

If you want to snorkel or scuba dive, you can rent equipment near the Vila do Abraão wharf and buy a ticket for the boat trip to the best spots on the other side of the island ( Lagoas Azul & Verde).

In high season you will find food vendors on the main beaches as well as water sports rental companies. However, don’t forget to take enough water with you if you go on an adventure in the most remote areas.

Night at the pousada. 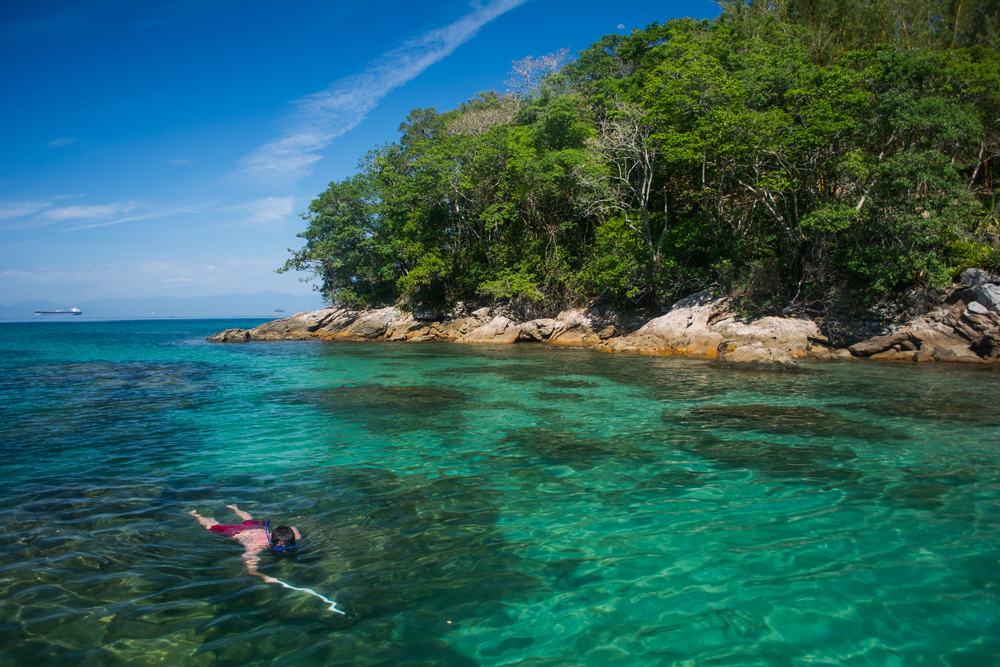 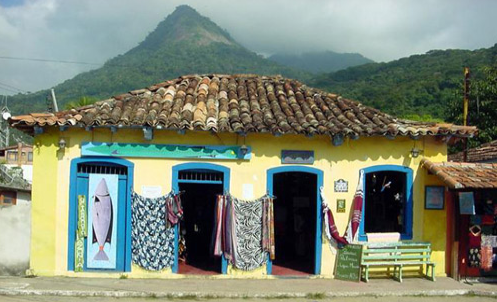 After breakfast at the pousada you have the morning to enjoy your hotel, the beach or a last stroll on the island. The hotel check-out is at noon.

At 13:00, you will take a regular shuttle from the quay in Vila do Abraão to Angra dos Reis. Depending on the type of boat, the journey varies between 45min and 1h30.

After arriving in Angra, you disembark and join the driver waiting for you at the exit of Port Estação Santa Luzia.

You then take the road towards Rio de Janeiro.

During the journey you can admire, one last time, the splendid landscapes of the Costa Verde. Halfway, you will turn inland and leave the Costa Verde to reach the carioca capital.

On arrival in Rio de Janeiro, your transport will drop you off at one of the city’s airports (Santos Dumont or Galeão) for your flight or at a hotel in the city to continue your stay (1h30 to 2h30 depending on the destination).

End of our services. 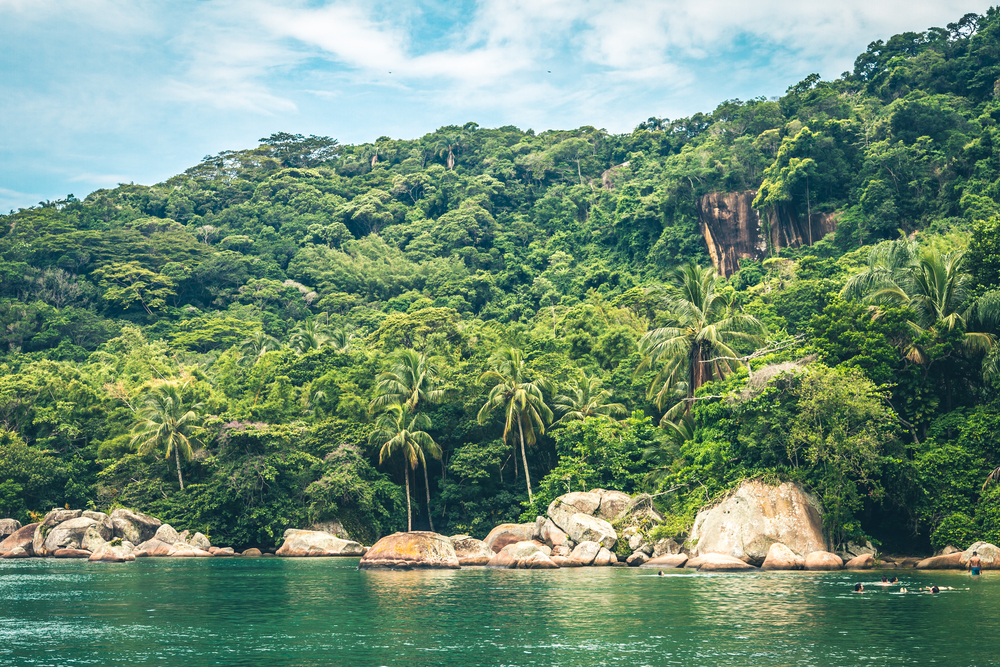 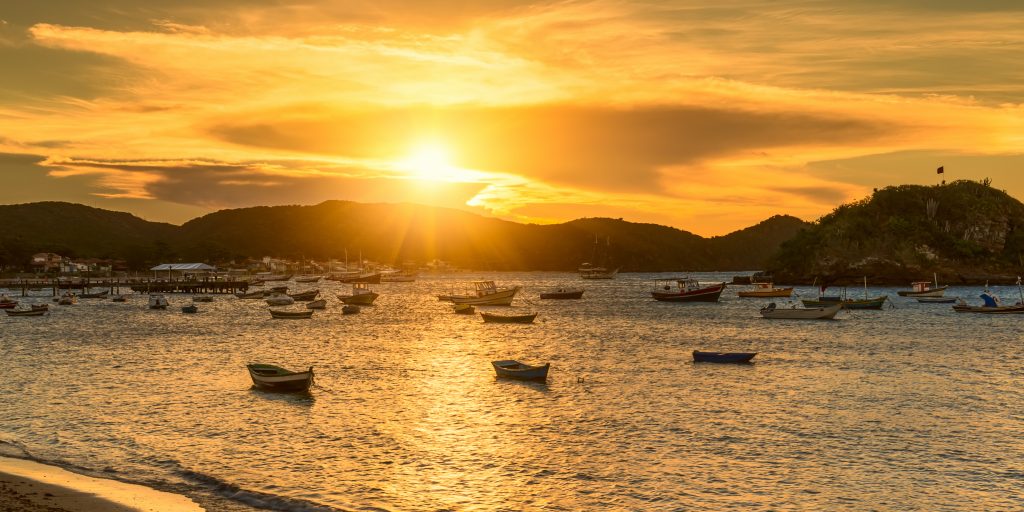 The Pousada Naturalia is a friendly little establishment built to be in harmony with its environment and giving pride of place to natural materials such as wood. Located at the end of the Vila do Abraão village for more tranquillity, this hotel does not have a television in its 12 rooms in order to prioritize contact with the environment that surrounds it. On one side, the ocean is visible from the private balcony of each room, on the other the Mata Atlantica rainforest.

It is a pleasant pousada offering services that make it the best value for money in the village. It’s a quality address that will suit all categories of travellers not wanting to spend more than necessary, but looking for a certain level of comfort and pleasure.

With 9 spacious and comfortable rooms, each boasting personalized and tasteful decoration, facing the ocean and in a vast garden of 8 hectares the pousada Sagú is the best establishment in the Vila do Abraão neighbourhood.

With beautiful facilities, a good restaurant and an ideal location facing the bay, just past the beach da Julia, it is isolated from the rest of the village. All this makes it the most exclusive hotel. If you are looking for top of the range services, then this hotel is the most suitable accommodation in Ilha Grande.

Low season price of the current year, given as an indication and not a quote.

Ask for a quote

See our other packages to accompany your stay on Ilha Grande 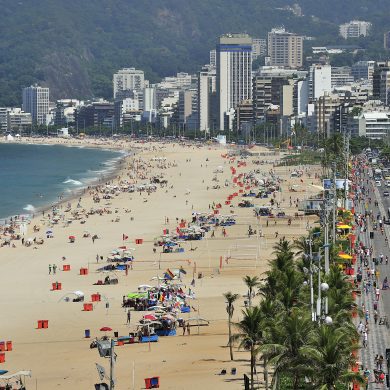 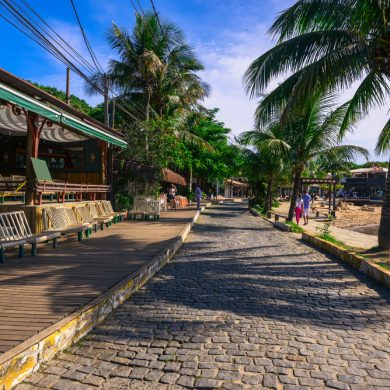 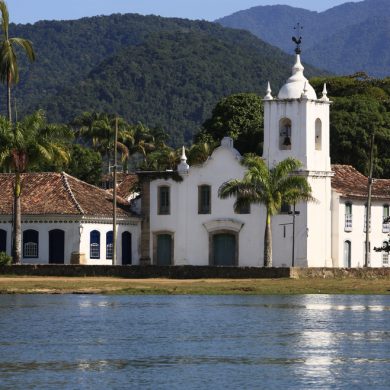 PARATY,the jewel on the COSTA VERDE

YOU ARE HERE: Home • My trip to Brazil • Packages by destination • Rio de Janeiro and surroundings • Ilha Grande
Contact us
Menu