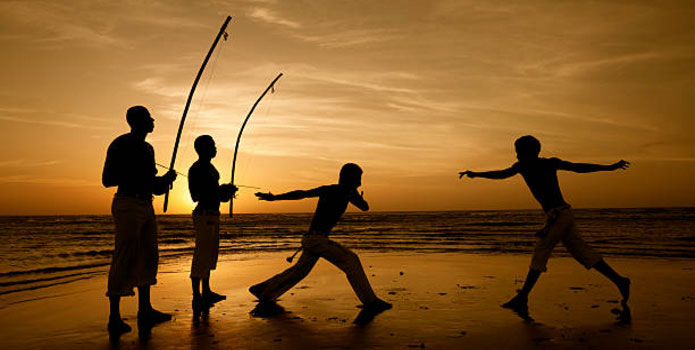 “The dance that freed the slaves”

Any discussion on popular sports in Brazil will always mention “Capoeira.” An integral part of Brazilian culture, it´s practice is now worldwide.

In fact, many major cities in the world now have a “grupo de capoeira” led by a “mestre de capoeira.” With the rising popularity of this activity, Brazil Selection invite you to take a look at the history of capoeira, it´s place in traditional Brazilian sports and what it means to be a “capoeirista” today. 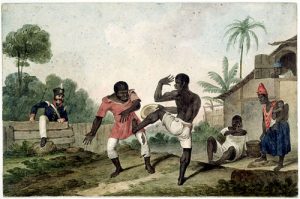 The art and practice of Capoeira, then and now.

Brazilian Capoeira is rooted in the combat methods practiced by black slaves taken mostly from Angola and Congo. They were forced to leave for Brazil when it was colonized by the Portuguese in the 16th century. Arriving in Brazil, the slaves were prohibited any form of cultural reminiscence which included the training of self – defense techniques. Capoeira was born as a way for the slaves to remember their lives in Africa, to celebrate their culture, and to train themselves in combat. Disguised as a dance, the slaves were able to invent techniques that did not alarm their masters, but could be devastating in a fight. Capoeira is used widely today in mixed martial arts and is praised by famous combat sports stars, such as Conor McGregor and José Aldo.

Throughout the course of Brazilian history, capoeira has long been misunderstood by authority and considered a crime. It was practiced secretly until the beginning of the 20th century when       “Mestre Bimba” Manuel dos Reis Machado met the then president of Brazil, Getulio Dorneles Vargas, to convince him of the cultural significance of Brazilian capoeira, and its usefulness as a healthy sport for individual discipline. Bimba was granted permission in 1930 to open the first capoeira school in Salvador de Bahia, where he taught a faster version of capoeira. His style was subject to strict codes of learning and utilized higher kicks and more combat techniques. This became known as “capoeira regional,” whereas the more traditional form of capoeira closer to the art practiced by the slaves became known as “capoeira Angola” championed by Vicente Ferreira Pastinha known as “Mestre Pastinha.”

Capoeira is practiced in a “roda de capoeira.” This is a ring of practitioners singing and sometimes clapping along with capoeira music.  If you watch a roda, you may wonder whether a dance or a fight is taking place. The answer is that Capoeira is both and neither. Capoeira is a game (jogo) that is played. It is played two at a time, and during the game each capoeirista will “ask and respond.” This is to say that he will respond to the movements of the other, whilst simultaneously exhibiting his own movements and style. The “toque” (rhythm) of the berimbau (traditional Afro – Brazilian instrument) dictates the game.  Usually the mestre of the group will play the main berimbau (gunga) and control whether the game played is Regional, Angola, or one of many other sub – styles.

To enter the roda, you must interrupt a game by “buying” it, were one player leaves and the other enters.  The other case is when the mestre calls two players to start the roda, in which case they kneel in front of the gunga and cartwheel into the circle to start the game.

The musical aspect of Capoeira is what truly makes it a special practice, different from other martial arts. The songs tell stories of the suffering of the slaves, their day-to-day lives and even sing of common everyday things. The lyrics of capoeira music, often expose the connection capoeira has with the Afro – Brazilian religion, Candomblé. Many of the values of capoeira coincide with Candomblé beliefs, derived from the same origins as capoeira. The music played determines the speed, the style and the character of the game, which can be more malicious or more playful.

The main instrument of Capoeira music is the berimbau, a bow with a taught wire strung at both ends, which is struck with a small stick and resonates through the “cabaça,” a hollowed out gourd.  This is accompanied by a “pandeiro” an East – African leather tambourine and usually two “atabaque,” a tall African hand drum. Lastly, there are the agogô and the reco – reco.

The mestre will sing a verse to which all participants reply in chorus, remember whilst there is no music playing, no one is to play capoeira!

If on your travels in Brazil you suddenly hear a chorus of singers singing and clapping in the streets, or a group of people dressed in white displaying feats of amazing acrobatics, you now know what is going on! To experience capoeira, is to immerse yourself in true Brazilian culture. The energy felt is known as “Axé,” generated by the victory of Capoeira over hundreds of years of struggle, an energy everyone is welcome to share.

An experience you must have in Brazil, if you see a roda, do not hesitate to join in and clap along! Why not even find an academy to take a lesson or two? You are after all, in the home of this incredible Afro – Brazilian martial art. 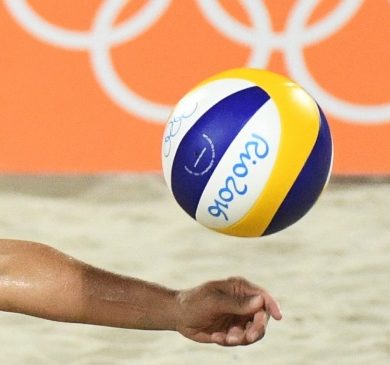 YOU ARE HERE: Home • Capoeira – the dance that freed the slaves
Contact us
Menu